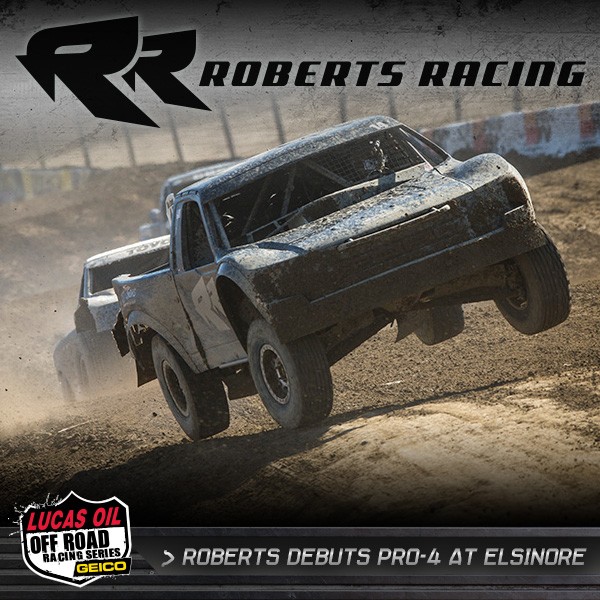 Roberts Racing’s brief hiatus from short course racing doesn’t mean they have not been busy. In fact, they have been putting in substantial time and energy revamping their entire short course effort. At the Lucas Oil Off Road Racing Series final race weekend for 2015, Roberts Racing will debut the much anticipated Pro-4 truck of Dale Dondel. “We are looking for two days of racing with clean finishes,” said Dale Dondel, “We hope to learn as much as we can in the last two races and take that knowledge into next season.”

Roberts Racing’s newly constructed GoPartsRacing.com Pro-4 has run 100 laps in testing to prepare for the initial launch. The truck’s unveiling has already garnered substantial interest, enough to warrant a MavTV feature to be filmed at the Lake Elsinore event. “The Go-PartsRacing.com Pro-4 is a rocket ship!” said Jared Roberts, “We’ve had Dale, Johnny Greaves and Doug Fortin all assisting in getting it dialed in. It will be Dale’s first Pro-4 race; he is pumped!”

In addition to Dale’s Pro-4 debut, Mike Dondel will be back at the wheel of his revised Pro-2 truck. After a wicked crash in Tooele, Utah, Mike Dondel took the opportunity to make substantial improvements to his Toyo Tires, Specialized Automation Services, Racer Engineering, MOMO, King Shocks, KC HiLites, Howe Power Steering and F&L Racing Fuel Pro-2. He cut off the front and back ends of the truck and incorporated improvements to the suspension geometry and overall design. The improvements have knocked seconds off Mike’s lap times during testing and helped him regain confidence in the truck.

“My father always says; one step away from fear is excitement,” said Roberts, “Without making bold moves, we would not have made it this far. Our guys have been busy thrashing on all the cars; the energy going into this weekend is fantastic. The whole team is real excited to get back on the track and see how things pan out.”

The Roberts Racing team hits the track this Friday at Lake Elsinore Motorsports Park in Lake Elsinore, California. Gates open at 11:00 am on Saturday and Sunday, October 24 and 25. For all the latest about Roberts Racing, be sure to head over to https://roberts-racing.com/ News, photos, videos and a full report after every race can be found there.